“Intellectual life at Amherst is broad and deep; it is enlivening.... It is a friendly and creative place, combining a strong sense of community with openness—to people, ideas, and differences.” “Our responsibility remains to select the best of diverse students, so that they may come here and learn from each other. To ensure that they balance learning and effort of mind, spirit, talent and body. To fire in them a lifelong desire for learning and moral reasoning and action. To inspire them to do what the college was founded for—to enlighten, care for and advance society as a whole, within and beyond our borders. It remains our students' responsibility to learn, engage and change the world. It remains the faculty's to inform teaching with scholarship that is deep but also broad—in the way it can be only at a great liberal arts college. And it remains our duty, together, to serve the community, and thereby learn further; to work with those less privileged. By serving our core mission of education, we serve beyond it.” Anthony W. Marx Speech Archive » “We in the liberal arts colleges believe that teacher and student must stand face to face in the many conversations that are the work of both; we believe in teaching as conversation because the best teaching is conversation; except by dialogue we cannot do our work. The college, unlike the university, takes the dialogue of professor and student as a master principle. Neither graduate students nor teaching assistants can spell us in this central portion of our vocation. Our scale and our intimacy, our flexibility in moving across and among fields, our openness to one another and to our students—these are the strengths of a community built on dialogue. Yes, we are specialists, but we are also generalists: intellectuals first, with a curiosity that does not stop at the boundaries of one discipline but pushes on to ask about the disciplines of our colleagues.” Tom Gerety Speech Archive » 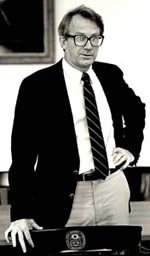 “A university or a liberal arts college, quite apart from any religious affiliations, is pledged to a special faith of its own. It believes first that men and women can live together in a community where they teach and learn from each other…. A good college seeks not merely a coterie of the like-minded, to reinforce convictions already formed, but seeks out every vein of talent and opinion from every possible background, so that from the ferment of ideas freely exchanged it can advance to new conclusions. Those who teach and those who learn and those who support both with their work are thus bound together in a common endeavor, with each other and with all those similarly engaged.”

“Our tradition is not one of mere survival, and we do not relish the notion of administering the college in such fashion that only the very well-to-do can benefit from association with it. Our traditional goals have stood the test of time, and we must seek by every reasonable means to sustain them. They are to provide the very best faculty, resources, and learning atmosphere that can be attained and at the same time make it possible for the best qualified students to attend Amherst, irrespective of their financial circumstances.”

“Education is an activity, it is the effort to seek order where order cannot readily be seen, to establish connections between things not obviously connected. It is the attempt to discriminate within, and to create ordered representations of, the world of nature and the world of man. Its roots lie in insistent curiosity; its outcome takes the form of clarity where there was obscurity before.... Its symptoms are always and everywhere the same: a critical engagement with life, a willingness to examine the given and to question dogma, an ability to entertain novel ways of thinking.”

“When able young people are brought together at an age when they have attained their full intellectual powers, without having their zest and enthusiasm dulled by experience; when they are gathered in a community which also contains scholars and scientists who have chosen the life of the teacher; when they have available in the library the whole range of human knowledge and in the laboratories the opportunity to add to it; then something almost mystical occurs—something that is an amalgam of growth, increasing mastery of self, and a dawning sense of direction, infused with the vitality of aspiration. For different students the results of four years in such a place and such an atmosphere will vary widely and may range from ineptitude to proficiency, from confusion to clarity, from failure to triumph. For all however, those four years form the cornerstone of life…. In later turmoil and uncertainty they form a stay for the mind.”

“I see in the four years of college an opportunity for young men to live here and now as young citizens, in contact with the best knowledge man has been able to discover and in intimate association with their fellows and the faculty.”

“In education, from the first grade to graduate school, the aims are threefold: first, to fit us for more successful practice of our respective callings; second, to enrich and refresh our lives with more intelligent and varied avocations; and, third, to render us more helpful in our manifold relations to the community at large.”

“The wise teacher will place the tiller in the hands of his pupil and let him feel its touch, learn by experiment, how shrewdly the helm directs an unruly craft.

“The college is called liberal… because the instruction is dominated by no special interest, is limited to no single human task, but is intended to take human activity as a whole, to understand human endeavors not in their isolation but in their relations to one another and to the total experience which we call the life of our people.”

“In the symbol and the legend of our college seal, the rays from the Sun of Righteousness fall upon the open pages of the Book of Life, while our aspiration and our prayers find voice in the words which are our confident battle-cry in the struggle of light and truth with ignorance: ‘Terras Irradient’ — ‘Let them illumine the whole earth.’”

“The first question asked by the human mind, and which also marks the mind’s progress in all its stages, is the question, ‘Why.’”

“Few persons can have a higher appreciation of the importance of this college than myself…. I look upon it as a young lion, born at the foot of Holyoke and Tom, couching here in sheltered seclusion, in the center of the Commonwealth, acquiring muscle and brawn and power, and destined to make its voice heard throughout the land.”

“What sunrises and sunsets do we here witness; and what a multitude of permutations and combinations pass before us during the day, as we watch from hour to hour, one of the loveliest landscapes of New England.”

“It is education that pours light into the understanding, lays up its golden treasures in the memory, softens the asperities of the temper, checks the waywardness of passion and appetite, and trains to habits of industry, temperance and benevolence.” “To direct properly the minds of those whom we are to instruct, and to give every intellectual faculty its proper degree of culture…is an arduous yet pleasant task.”